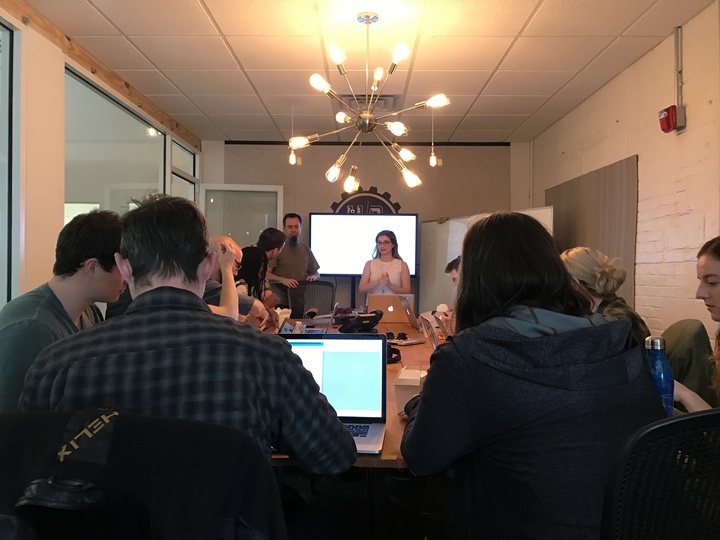 I asked Tom how difficult it is to actually build and program an IoT device. He started to explain the process and stopped. “Why don’t you come to our Lab and find out for yourself!” I jumped on the offer and was excited when Tom shared I could extend the invitation to my colleagues. Ergo, RIOT Field Trip. The group ranged from solution architects to administrative assistants. Our experience with IoT and coding ranged from 10+ years to none at all. Victoria Rind, Performance Textile Innovator, welcomed our group and shared that our team will build a fortune telling coin bank. We used Arduino and Audacity as our software base and RIoT provided the hardware kits.Zach Kuhn, Director of Development at Smashing Boxes, stated, “Victoria gave a great introduction to the Internet of Things that included all levels of technical skills. It was easy to see the power of the technology. The sensors and hardware are so small—it opens up possibilities in making everything around us smarter and more aware than ever before.”“Not worrying about concurrency, data normalization, blocking or coroutines and getting back to the basics of electricity and a little bit of coding was a welcome change of pace, “ said Jon Latané, Software Engineer.And on the other end of the spectrum, Casey Haycocks, Project Manager, shared, “the experience gave perspective to those of us who do not code or work with electricity on a daily basis. I now know a little more about what my fitness tracker is actually doing while it's on my arm all the time.” There is nothing like writing a line of code and watching your device react. It was instant gratification. Our team did not have enough time to build the entire product, however what we did have time for was experimenting with the speakers, importing code for songs, and blasting music through the lab. Overall, it was a win.IoT is ever evolving with so many avenues to explore. These avenues do not come without challenges as my colleague, Brian Carrigan, Director of Technology, points out in his article: The Challenges of Developing Connected Devices. That being said, this should not stop you from experimenting, asking questions, and getting involved. It is our responsibility to contribute to and expand the 4th Industrial Revolution.CONTACT US today to talk about your next IoT project.